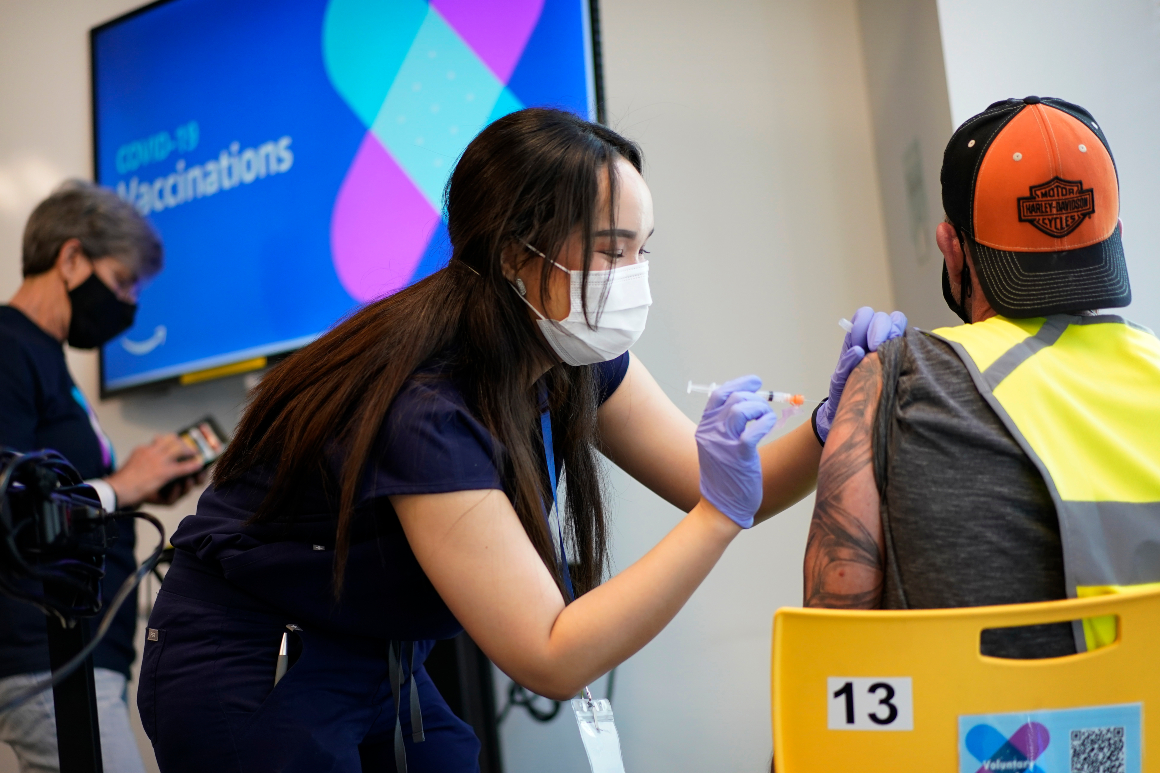 The Biden administration also has struggled to make inroads with vaccine skeptics on the right. White House efforts to engage conservatives have included running ads during shows popular with right-leaning voters like “Deadliest Catch” on Discovery, and Country Music Television. Venues like NASCAR speedways have been used as vaccination sites. But many experts are worried that even if health officials deem J&J safe, the blood clot scare will only heighten the fears.

The Biden White House has said it has not asked Trump to do pro-vaccine messaging. And Trump was not asked to be part of the Ad Council PSA that featured former Presidents Barack Obama, George W. Bush and Bill Clinton, according to a staffer for one of the former presidents involved in that ad and multiple advisers to Trump. Planning for the ad began in December and was filmed on Biden’s Inauguration Day. At that point, Trump had made clear he would not be staying in Washington for the festivities. Notably, however, the council shot another ad with the former presidents and First Ladies, and included Jimmy Carter who could not travel to the inauguration.

When Trump has made public statements encouraging immunization, they have been rare, and sandwiched amid political statements, endorsements of potential MAGA 2020 candidates, and attacks on the small group of Republicans who backed his impeachment.

During an interview with Maria Bartiromo on Fox News, he recommended the shot — but then acknowledged that people have a right to refuse it.

“I would recommend it, and I would recommend it to a lot of people that don’t want to get it, and a lot of those people voted for me frankly. But again, we have our freedoms and we have to live by that and I agree with that also,” Trump said in March. “But it’s a great vaccine, and it is a safe vaccine and it is something that works.”

In his first statement after the J&J pause, Trump accused the FDA of playing politics, of trying to help Pfizer, the maker of a different vaccine, and of intentionally delaying vaccine approval until after the 2020 presidential election.

“They didn’t like me very much because I pushed them extremely hard. But if I didn’t, you wouldn’t have a vaccine for 3-5 years, or maybe not at all,” his statement read. “The only way we defeat the China Virus is with our great vaccines!”

Some former Trump administration officials said they haven’t given up on him deciding to chime in more consistently, particularly if it gets him back in the public eye. They note that he takes immense pride in Operation Warp Speed, the $10 billion private-public partnership which helped more than 200 million vaccine doses get developed, tested and authorized at record speeds by pharmaceutical manufacturers.

Others argue that he could be doing more, bristling at the notion that he has been anything other than engaged in promoting vaccination.

“President Trump has been a consistent leader and an important voice — and has advocated for the production, development, and use of the vaccine early and often, including him taking it and instructing other people to also get the vaccine,” said Kellyanne Conway.

And Trump senior adviser Jason Miller said the former president “is going to continue to push folks to get the vaccine.”

But few beyond the Trump faithful believe he has been an aggressive and eager promoter of vaccinations. And without Trump in the lead, other prominent Republicans have been left to pick up the slack. Ivanka Trump, the president’s daughter, tweeted a photo of her vaccination last Wednesday (and received pushback in the comments section from the anti-vax corner of MAGA world), RNC Chair Ronna McDaniel shared news of her vaccination, and Republican leader Mitch McConnell has repeatedly called on the public to get the vaccine. Rep. Brad Wenstrup (R-OH), who leads the House Doctors Caucus, doesn’t just defend the vaccine; he goes home to Ohio and administers shots — in one case, he said, on a bus full of elderly, mostly low-income, people who had traveled for their injections.

And last week, House Republicans welcomed its newest member, Julia Letlow of Louisiana, to Congress. Letlow, who lost her husband, congressman-elect Luke Letlow, to Covid-19 before he was able to enter office, has called on those vaccine-skeptic Republicans to consider her own family’s experience.

But Trump’s relative silence on this front is notable, other Republicans say. And without it, it could prolong the vaccination campaign and the virus fight as well.

“He could have a real impact and not by getting the standard public service announcement but by talking to his people like he talks to his people,” said former Republican congressman Peter King, who advised that Trump make a personal appeal to his supporters in his own unique way. He even suggested a script the former president could use: “‘Believe me, I wouldn’t take this thing, I wouldn’t put my own health at risk if i didn’t think it was necessary,’” King said, imitating a potential Trump sales pitch for the vaccine. “Do it in a real conversational way but a wise guy way. ‘You think I would let my daughter get it if I didn’t think it was safe?… Just because Fauci is for it doesn’t mean it’s wrong.’”

“I think it would serve a real purpose,” King said.

Sam Stein contributed to this report.