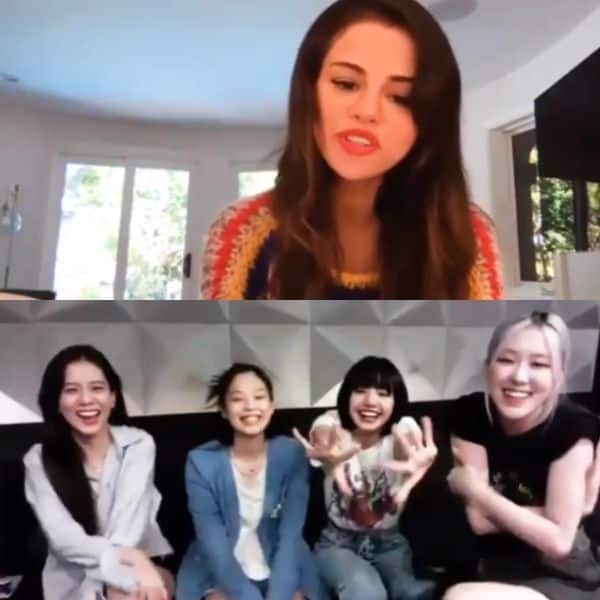 In case you don’t know yet, two pop icons are soon going to collaborate with each other. If you have been living under the rock till now, let us tell you that the Korean girl band, BLACKPINK are coming up a new single with pop star Selena Gomez. Yes, we are screaming and jumping up and down, ever since we heard the news. YG Entertainment has been teasing fans forever now and A couple of weeks ago, they finally revealed that it is Selena Gomez who they’ll be collaborating with this time. Also Read – BLACKPINK x Selena Gomez: YG Entertainment finally CONFIRMS collaboration of the two pop icons

The official Instagram handle of BLACKPINK revealed the title of their new single, Ice Cream, a couple of days ago. They dropped a teaser video of the same earlier today. The teaser video features BLACKPINK connecting with Selena Gomez over a video call. The Korean girl band, BLACKPINK has four girls namely, Jisoo, Jennie, Rosé, and Lisa. They could be seen super stoked on seeing Selena online. Likewise is the American popstar’s reaction. Selena thanks them for “staying up so early,” while Rosé says “We are really glad you are in it. We’ve been a huge fan of yours.” The other girls also join Rosé in praising Selena. Surprising the girls, Selena reveals that she is a fan of their work as well to which the girls go gaga. Have a look at their reactions here: Also Read – Justin Beiber files defamation case against two Twitter users who accused him of sexual assualt

We loved the way they have kept it thematic with their music video. Talking about their new single, Ice Cream will be out on August 28, 12 AM EST, and 1 PM KST! which is around 9:30 AM in Indian Standard Time. In a statement released by Koreaboo, YG Entertainment had said, “These two artists, who have been fans of one another for a long time, have finally made their dreams come true with this collaboration. BLACKPINK expresses their thanks to Selena for participating in this album and is excited to share the new song with fans.” Also Read – Justin Bieber dismisses sexual assault allegations; plans to take legal action against the accuser

After watching the teaser video, our excitement for the single has risen ten folds. How about you? Let us know by tweeting to us @bollywood_life .