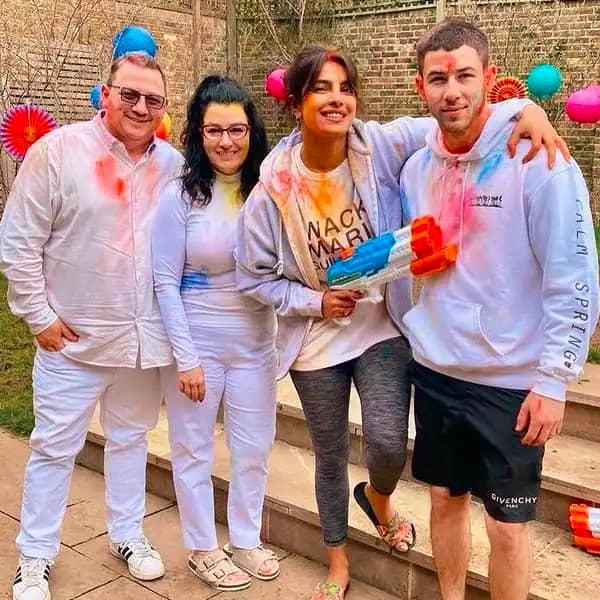 As we are still amid the Coronavirus pandemic, the celebrations are very muted. Priyanka Chopra, who is currently in London, posted some pics on Instagram She can be seen with her hubbyNick Jonas, her father-in-law Paul Kevin Jonas Sr and her mother-in-law Denise Miller-Jonas. Priyanka wrote: “Holi, the festival of colours is one of my favourites. Hope we can all celebrate it with our loved ones, but in our homes. Happy Holi everyone.” Nick Jonas also shared the same pictures from the celebrations on Instagram and he wrote: “Happy Holi! From our family to yours.” Have a look at her post below: Also Read – Tiger Woods accident: Jada Pinkett Smith, Alex Rodriguez, Cher pray for his speedy recovery

In her recent interview with Oprah Winfrey, the actress revealed that in the initial phase of their relationship , she was not taking his text messages seriously as she was not lucky in her love life. She said, “I didn’t honestly take it very seriously when Nick was texting me. I was 35, I was like I wanna get married, I wanna have kids. He’s in his twenties, I don’t know if that’s something he’d wanna do.” Confessing that her mom manifested Nick, she gushed about her hubby and added, “Nothing surprised me more than him. He’s such a self-assured man. So sensible. So excited about my achievements. My dreams. (It’s) such a true partnership that he offers me in everything that we do together.” Also Read – Will Smith’s wife Jada Pinkett Smith reveals having an affair with August Alsina

On the work front, Priyanka Chopra Jonas will be seen in Citadel, for which she is currently shooting. The actress also has Matrix 4 in the pipeline. Keanu Reeves, Carrie-Anne Moss, Jada Pinkett Smith, Lambert Wilson, and Daniel Bernhardt reprise their roles from previous films in the series. Lana Wachowski is directing this film and co-producing it along with Village Roadshow Pictures, Wachowskis Productions and Silver Pictures. Priyanka will also be seen in Text For you, which is said to be a remake of the 2016 German film SMS für Dich. Also Read – Will Smith’s daughter Willow Smith offered to direct an adult film