Natalie Portman shuts down her pregnancy reports; hits back at bodyshamers in a hard-hitting post

There were reports that Hollywood actress Natalie Portman was pregnant after she was spotted wearing a loose top. A section of the American media had suggested that she could be expecting and speculated a baby bump. However, Natalie seems quite unhappy with her pregnancy reports. She has slammed the reports clarifying that she is not pregnant. Also Read – Throwback Time: When Ranbir Kapoor asked Natalie Portman for a picture, but was angrily told to ‘get lost’ — deets inside

“Hey, so I’m totally not pregnant,” Natalie posted on Instagram story. She also hit back at bodyshamers in another post saying, “But apparently it’s still okay in 2021 for anyone to speculate and comment on a woman’s body shape whenever they want? Do better.” A representative of the actress also denied the pregnancy news to Daily Mail Australia. Also Read – Black Swan actress Natalie Portman on being sexualized in the media at the age of 12: It took away from my own sexuality 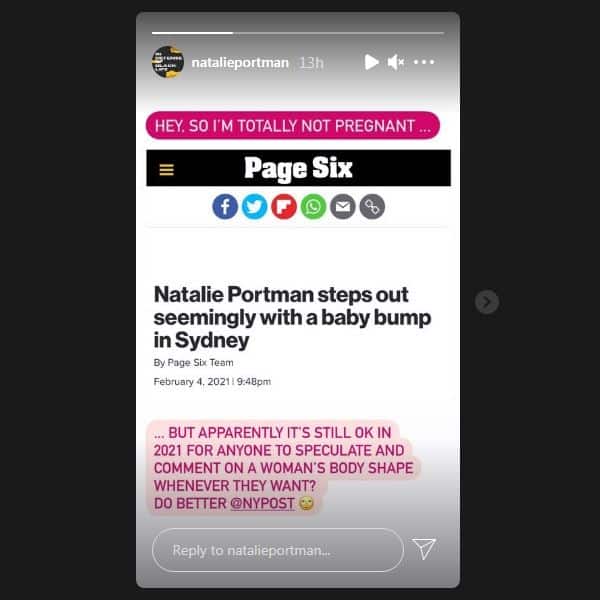 A couple of months ago, Natalie had opened up how she was bullied in school for being a child actress, while she spoke to actress Drew Barrymore. The two actresses were discussing their experiences as child stars.

“I read this thing about how you didn’t have an easy time in school because you would go out to movies and then come back and just have an awkward time with the other kids at school… I haven’t really read that from a lot of people and that was totally my experience, I really related to that,” Portman said, while speaking on The Drew Barrymore Show, reports femalefirst.co.uk.

Barrymore was a child actor and starred with Portman in the 1996 film, “Everyone Says I Love You”. Portman shared that she found the experience tough. Barrymore said, “The irony is that they would always say to me, ‘You think you’re so special’. And I really read that in what you said in the copy and I’m like, ‘Oh my gosh that’s exactly what they would say to me’ and I was like, ‘I not only don’t think I’m special but you are absolutely confirming I am not.”

Portman added, “I know it’s so sad and also it’s like you know young people should be able to be proud of their accomplishments and I was like, ‘Oh God, I should just keep my head down all the time’. Which isn’t a good way to go through life.”