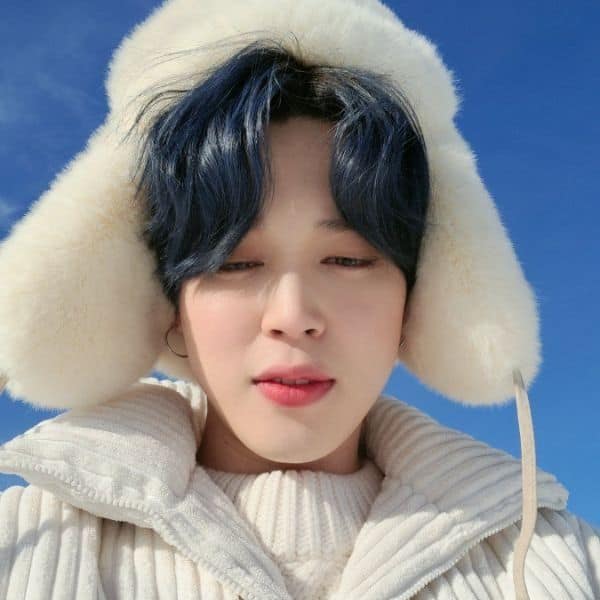 BTS’ Jimin is one of the most popular K-pop idols who never fails to grab headlines and create a stir on social media. And that’s what has happened of late. A couple of hours ago, two selfies were shared featuring Jimin on the BTS’ official Twitter handle. The tweet is going viral and we believe it is a bts from their shoot for the Winter Package 2021. Jimin is seen soaking in the vitamin D as he enjoys some snow outdoor. Chim Chim is seen wearing earmuffs and winter wear and looks very cute indeed. Jimin posted the pictures on BTS’s official Twitter and wished the BTS ARMY, “Good Night #JIMIN.” In case you haven’t come across this viral tweet by Jimin yet, have a dekko here: Also Read – BTS love life: We bet you don’t know who Jin, RM, Suga, V, J-Hope, Jungkook and Jimin were dating

ARMY has been going crazy over the selfies and expressed their sentiments by showering the tweet and pictures with their love and messages. Have a dekko at their tweets here: Also Read – BTS’ BE Essential Edition: K-pop band teases fans with Jimin and Jungkook’s notes ahead of the release of Disease and Stay

I love you from the bottom of my heart, Jimin??Thanks for giving me lots of energy as always. 진짜 보고 싶었어요♥️✨ #JIMIN

I wish I could give you the whole entire universe

BABY YOU LOOK SO COZY AND SOFT AND TINY AND BEAUTIFUL, A WHOLE BUNCH OF ABSOLUTE CUTIEPIE!!! ILOVEYOU!!! ??

Jiminie, I know it’s a long way off, but i’m giving you a rose for february 14th.

Fans are loving the texture of Jimin’s skin and have been pouring love over the same. It is believed that Jimin cares a lot about his skin, as he is known to have glowing, flawless skin. He tries to drink as much water as possible. He thinks skincare is a form of self-care and tries to clear his mind by cleansing his face after a performance. Also Read – BTS: Jimin and Jungkook cheer for V in the latest episode of Run BTS, dishing out major #FriendshipGoals

Meanwhile, earlier in a fun interview with E! News, the septet had revealed their Hollywood crushes. Jimin had then revealed that he has a crush on the Notebook fame actor Rachel McAdams. Other members had also revealed the name of their celebrity crush. RM named Blake Lively as his Hollywood crush and Jin named Anne Hathaway. J-Hope took Amanda Seyfried’ name while Rapper Suga named Scarlett Johannsson as his crush. V aka Raehyung had named Rachel McAdams and Lilly Collins. However, Maknae Jungkook couldn’t recall the name of his crush leading to a hilarious situation.

So, how did you like Jimin’s selfie? Let us know by tweeting @bollywood_life.

Ganni Fall 2021 Is Inspired by Princess Diana and ’90s Angst