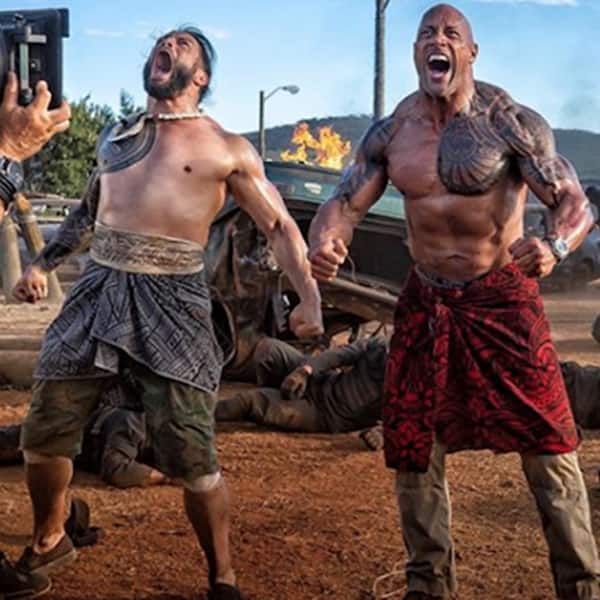 The WWE Universe has been eagerly waiting to witness a pumping iron match between former WWE superstar and Hollywood actor Dwayne ‘The Rock’ Johnson and his bloodline and the current WWE Universal Champion, Roman Reigns. But it seems like, it is highly unlikely that The Rock and Roman Reigns will face each other anytime soon. Also Read – Tuesday Trivia: With Pathan Shah Rukh Khan becomes the 1st Indian actor to shoot at NASA, Discovery Channel, Madam Tussauds and Burj Khalifa

According to former WWE writer Vince Russo, though Roman Reigns might have been consistent with his success since his return, his booking has gone downhill ever his return to WWE. He recently managed to retain his WWE Universal Championship against a beaten down Daniel Bryan at the 2021 Elimination Chamber pay-per-view. But it seems like the dip in Roman’s booking might be the real reason why The Rock won’t face him inside the ring. Also Read – Pathan: Shah Rukh Khan starrer to become the first Indian movie to be shot inside the Burj Khalifa; MASSIVE action scene planned

“Rock is one of the biggest movie stars in the world. Rock just got his own sit-com. Rock has more money than he will ever need. It doesn’t matter what WWE pays him. Rock does not need the exposure, the press, the marketing, yada yada yada. The only reason Rock would do this match is because of the Bloodline with Roman. Take that one step further. Obviously bro, you’d have to have The Rock do the job. You’d have to have The Rock do the honors. Rock does not need the money. It doesn’t matter how many zeroes. He doesn’t need the money. He’d be doing it to get Reigns over as his blood,” Vince Russo told Sportskeeda in an interview. Also Read – Dwayne Johnson to produce reboot of The Scorpion King

He further added, “Think about this bro, if a guy as intelligent as The Rock is sitting back and looking at this type of mediocre booking, is Rock going to say, ‘Wait a minute, I understand you’re my blood. I understand that this would be huge for my cousin for my family. But am I going to diminish everything that I’ve built for this shoddy booking?”

It remains to be seen if The Rock and Roman Reigns would go one on one against each other at the upcoming WrestleMania. Let’s wait and watch.

Talking about Dwayne ‘The Rock’ Johnson, there wouldn’t be many names in professional wrestling which have a better resume than the Brahma bull. He not only conquered the wrestling business in style, but also went on to do the same in Hollywood and became a big star there.

While The Rock was a major player in the late ’90s and early 2000s, his father Rocky Johnson was making waves in Sports Entertainment in the ’70s and ’80s. Rocky had numerous legendary battles with the likes of Harley Race and Terry Funk back in the NWA days and was also the first ever African American to win the world tag team championship.

When it comes to Roman Reigns, there isn’t a force stronger than him on the WWE roster. Since day one of his arrival in WWE, he has proven his naysayers wrong in the language of broken bodies and shattered superstars who thought they had his number.

Born into the Anoa’I family, Reigns was almost sure to make it into wrestling at one point or the other. Reigns’ father Sika was one half of the Wild Samoans with the other half being Afa. The duo went on to collect tag team championships from many promotions, including WWE, but Sika never had success as a singles wrestler like his son.

More Than 87,000 Scientific Papers Published on Coronavirus Since Start of COVID Pandemic

U.S. will have enough coronavirus vaccines for all adults by May,…