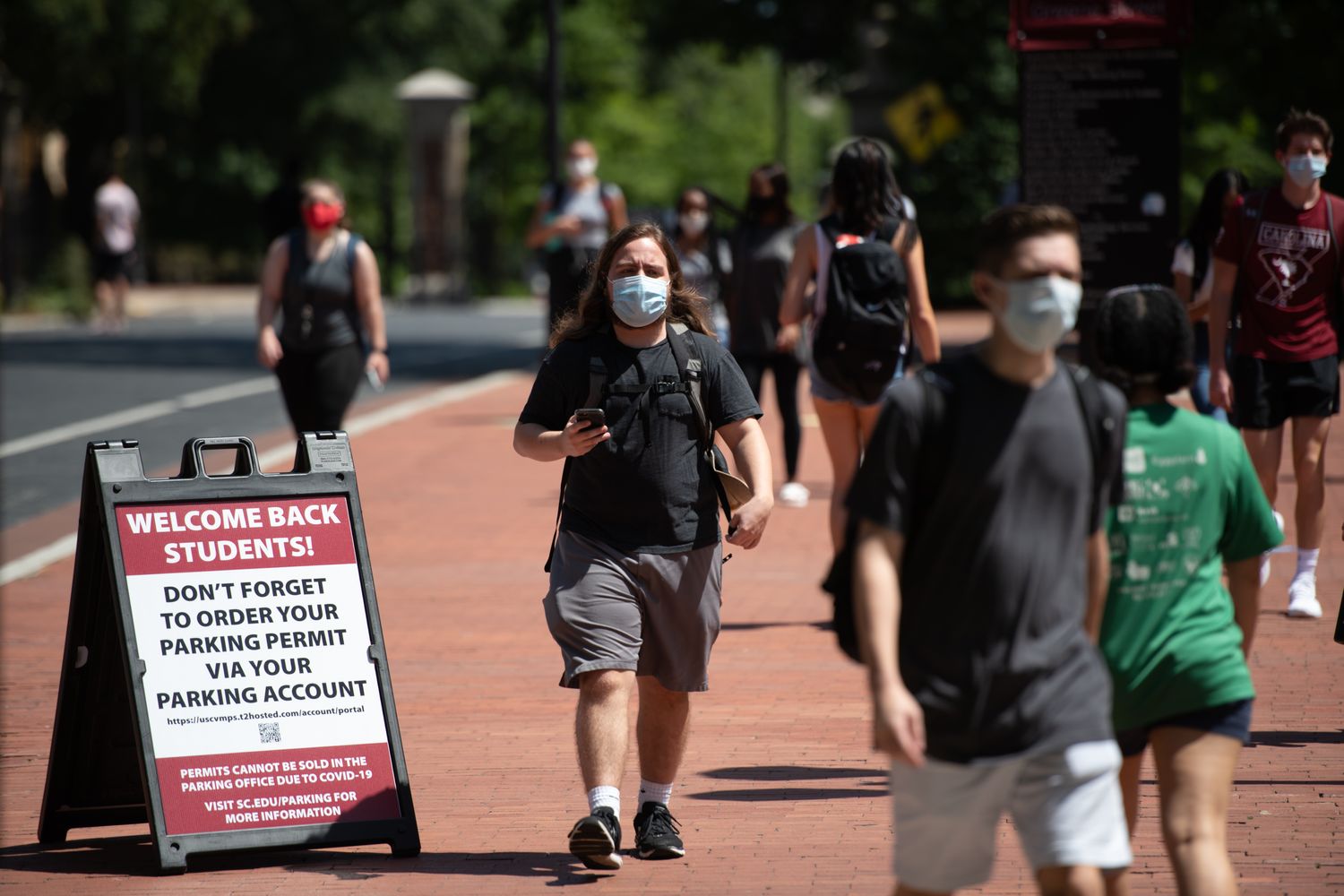 The University of Iowa and the University of South Dakota, both in states that have seen a recent surge of cases in the general population, are only advising students to get tested if they have symptoms or have been exposed to someone with a confirmed case of Covid-19.

The University of Iowa this week reported more than 900 students had tested positive. Officials there warned they’d impose unspecified additional safety measures if the positivity rate does not flatten.

The University of Arkansas, where there are more than 600 active cases, on Friday banned all nonacademic gatherings of more than 10 people. The news comes as the state reported a record number of new infections.

Gov. Asa Hutchinson said there are no plans at this point to send students packing.

“The last thing you want to do is send students home,” he said. “That would add to the spread as opposed to being in an environment where you can put restrictions in and guide behavior.”

As of Friday, at least 51,000 students have been infected and thousands more are quarantined, according to a survey from The New York Times. Public health experts fear the numbers could surge when the weather turns cold, forcing students to spend more time indoors where the virus can spread more easily .

Experts caution that mass testing of student populations needs to be done as part of a larger strategy with contact tracing and isolation in order to prevent outbreaks.

“Testing is very important, but it has important limitations,” said Tom Frieden, the former CDC director in the Obama administration. “It’s only as useful as what gets done with the testing results.”

Some schools have hired their own contact tracers and isolated infected students in hotels. But that plan doesn’t account for what happens afterward, said Tom Inglesby, director of Johns Hopkins University’s Center for Health Security.

“There isn’t a good strategy beyond that,” he said. “Unfortunately, that does mean people going home and bringing the virus with them.”

But some institutions like the University of South Dakota are allowing students to decide. A university spokesperson said the vast majority of on-campus students who are quarantining have chosen to do so at home. The roughly 300 infected students at West Virginia University, where fewer than 2 percent of tests are coming back positive, can remain on campus in an isolation housing unit, self-isolate or isolate at home.

William Hanage, an epidemiologist at Harvard’s school of public health, said he is particularly concerned about the schools unwilling or unable to do mass testing, because they won’t likely detect an outbreak until it is too late.

“By the time you become aware of the problem it is likely to already be much larger,” he said. “You are not going to detect outbreaks if you don’t look for them.”

Many of these dilemmas stem from a lack of clarity from the White House about the best path forward.

“Certainly the thing that has made it difficult is the guidance has changed,” said Anita Barken, co-chair of the American College Health Association Covid task force. “Trying to adapt your model to be consistent with the latest information and the latest guidance is frustrating.”

How Climate Change Led to the Fall of an Ancient Civilization

Former U.S. Olympic gymnastics coach dies by suicide after he was charged with human trafficking and sex crimes

Luminescent Solar Waveguide Windows Generate Energy From Inside and…

Former U.S. Olympic gymnastics coach dies by suicide after he was…