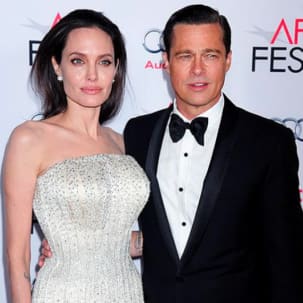 Angelina Jolie has accused former husband, Brad Pitt, of domestic violence. The actress has filed documents in the court on March 12, 2021 where she claims that she has ‘proof and authority’ to support her allegations. The two who were madly in love ended their marriage in 2016. It seems Angelina Jolie plans to use the allegations in their divorce trial. A source told HollywoodLife.com, “This deliberate leak of this information is to no one’s benefit and is simply the continuation of an ongoing relentless effort to target and tarnish Brad. Over the past four and a half years since the divorce filing there have been a never ending series of allegations, which seem to be solely to elevate one side by taking down the other. Hopefully some sanity will prevail in the future.” Also Read – 2020 Recap: From Tom Cruise shooting in space to Brad Pitt-Jennifer Aniston’s reunion to Madonna’s bathtub video — these were the top newsmakers in Hollywood

It seems the five minor children will also be dragged in the court battle. The kids, Pax, 17, Zahara, 16, Shiloh, 14, and the twins Knox and Vivienne will stand in her support. A long investigation was carried out in the plane incident where he apparently raised his hand on his son, Maddox Jolie-Pitt. This happened after a huge spat between the couple where he was allegedly drunk. Later, the actor was given a clean chit by both the Department of Child and Family Services and the FBI in Nov. 2016. Also Read – Jennifer Aniston tells Brad Pitt, ‘I think you’re so sexy,’ and he can’t sop blushing — watch video

Despite the clearance, he could only meet his kids after seeking approval from a psychologist. In 2018, a court told Angelina Jolie that Brad Pitt deserves more time with the kids. He was given more custody. In 2018, the couple’s case was supposed to go on trial but they managed to come to a temporary settlement. In October 2020, he sought 50:50 custody of his children. But her legal team prevented it. Clearly, the couple do not seem to have come to an agreement, and the kids will be dragged in this sordid battle. Also Read – Brad Pitt and Angelina Jolie’s custody battle gets ugly after latter claims the presiding judge has a relationship with the Se7en actor

Discovery of a Bizarre, Winged “Eagle Shark” in the Cretaceous Seas